Fr. Gerald Cavanagh, SJ, has taught since 1980 at the University of Detroit Mercy, where he holds the Charles T. Fisher III Chair of Business Ethics in recognition of his pioneering contributions to the field. Considered one of the founders of the field of business ethics, Fr. Cavauagh’s books are considered required reading in business programs in colleges and universities across the country. (Jim Dudley | Special to Detroit Catholic)

DETROIT — On a hot, sunny day in late May, Jesuit Fr. Gerald Cavanagh, the Charles T. Fisher III Chair of Business Ethics at the University of Detroit Mercy, welcomed a reporter to his campus residency at Lansing-Reilly Hall, just off W. McNichols Road.

At 90 years of age, Fr. Cavanagh is, in the words of former Detroit Mercy president Antoine M. Garibaldi, Ph.D., “Detroit Mercy’s quintessential Jesuit scholar who is as well-known on campus as he is around the world for his expertise and co-founding of the field of business ethics.”

Fr. Cavanagh has published five books, more than 40 peer-reviewed journal articles, and his research has been cited more than 2,750 times by academics around the world. His classic textbook, “American Business Values,” is required reading at business schools across the country, and his books are on the shelves of more than 1,500 libraries worldwide.

With such a long list of academic success, one might expect Fr. Cavanagh to be a rather serious academic professor, but he laughed easily and often as he sat down in a big, beautiful room in Lansing-Reilly Hall.

“I grew up in a suburb of Cleveland called Shaker Heights. I went to the other side of town to go to St. Ignatius, a Jesuit high school,” Fr. Cavanagh told Detroit Catholic. “After high school, I got into engineering at Case Western Reserve University. My father was also in engineering, and he encouraged me to go to Case. It was a highly competitive and challenging school. I have a sister who lives in New Jersey and a brother in Dallas. My mother was a homemaker and worked before marriage, but not after. I didn’t grow up in a strict Catholic family or anything like that. Both my parents encouraged us to think for ourselves. I had a nice, normal upbringing.” 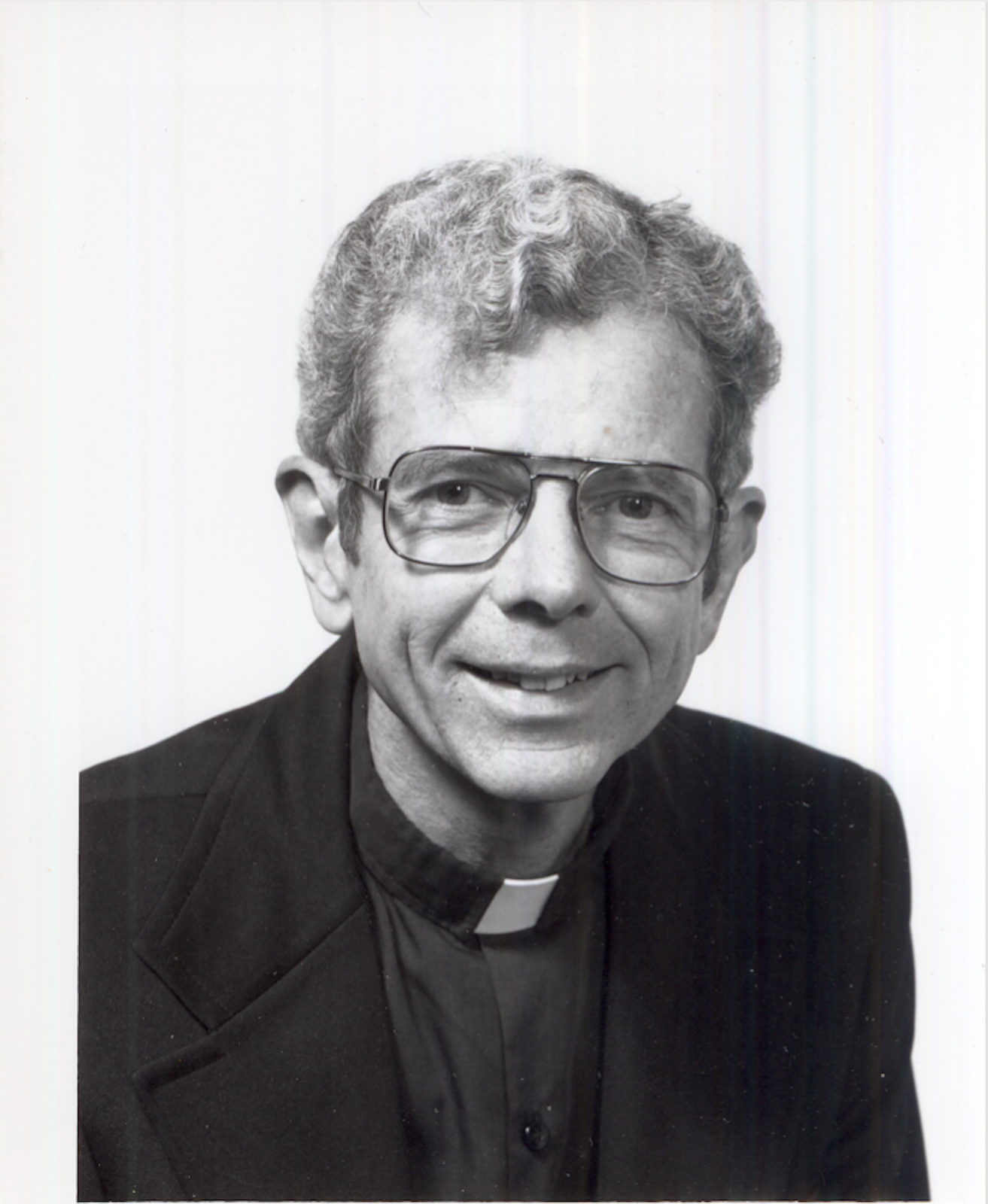 Fr. Cavanagh is pictured in an undated faculty photo. Growing up in a suburb of Cleveland, Fr. Cavanagh said his parents instilled values that encouraged him to think for himself. 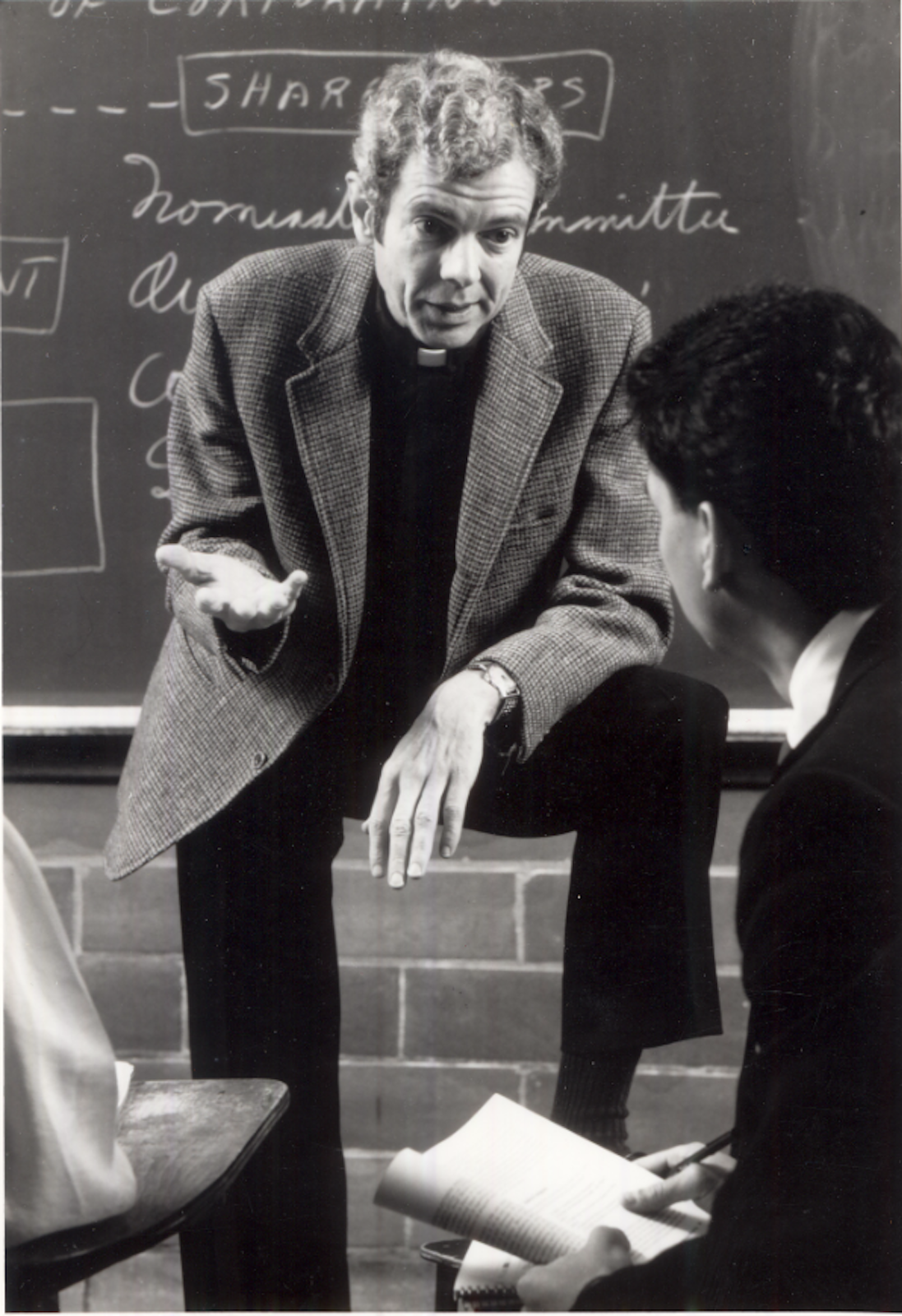 A younger Fr. Cavanagh is pictured with his students. As a young man, Fr. Cavanagh said he was drawn to the Jesuits’ “get it done” attitude and admired their dedication to social justice. (Courtesy photos)

Fr. Cavanagh smiled while recalling his early days. Perhaps it was that idyllic upbringing that helped him to go on to become a trustee at seven Jesuit universities and serve on the board of the Center for Religious Values in Business at Notre Dame University.

“After graduating from Case, I was making landing gear for aircraft, which is a good thing,” Fr. Cavanagh said. “But I was also very active in the Newman Club for Catholic students at non-Catholic schools. It was named after John Henry Newman. Our chaplain at the time was (Fr.) Paul Hallinan, who was a big inspiration for my vocation. He eventually became archbishop of Atlanta and was a leading figure at Vatican II. We were close friends for many years.”

It was at this time, in 1953, when Fr. Cavanagh decided to enter the Society of Jesus.

“I liked engineering. I liked the work. But I realized I wanted to work with people more than design things. That was the tipping point for me. I began thinking about a Jesuit vocation because I knew they taught in colleges and universities,” Fr. Cavanagh said.

“I did my last year of Jesuit studies in Ireland,” Fr. Cavanagh said with a laugh. “That was a good year.”

He was ordained in 1964 and continued his education by completing a doctorate in business administration at Michigan State University. 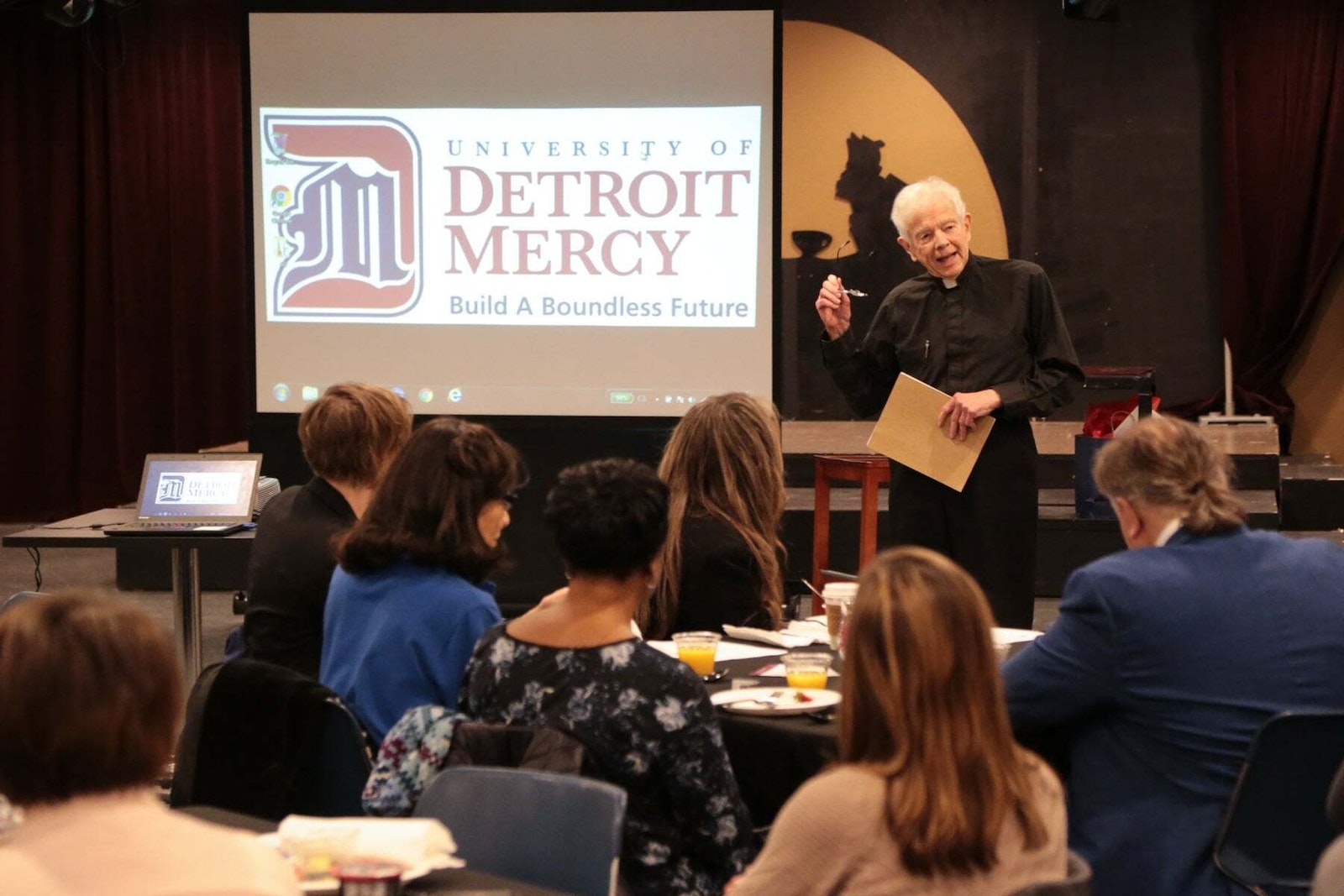 In the 1960s and 1970s, Fr. Cavanagh was one of the earliest pioneers in studying the social responsibility of business. It wasn’t even considered a sub-discipline within management, as it is today.

“I did my research at the Research Institute in Cambridge, Massachusetts. It was right after the riots in the cities. We interviewed a hundred black and a hundred white workers at four electrical engineering plants in Buffalo, Chicago, Memphis and Lynchburg, Virginia,” he said.

This was the subject of his first book, and soon afterward he landed at Wayne State University.

“I was at Wayne State for nine years, and then I was asked by the president at Santa Clara University to teach business ethics out there,” he said. “In the meantime, I was chair of the search committee to help find a new president here at U of D Mercy. Fr. Bob Mitchell from New York was chosen, and he said, ‘Well, you got me to come to U of D Mercy, how about you?’ I came back to Detroit to teach, and I’ve been here since 1980, except for one year when I taught at Boston College.”

Garibaldi, who recently was succeeded as Detroit Mercy’s president by Donald B. Taylor on July 1, called Fr. Cavanagh “unassuming and low-key,” adding “you will never miss him at a Titan basketball game in his red sweater.”

“We have been fortunate to have him as a faculty member for more than four decades,” Garibaldi said.

When asked whether he’s the most educated man he knows, Fr. Cavanagh joked that he may indeed have too much education. 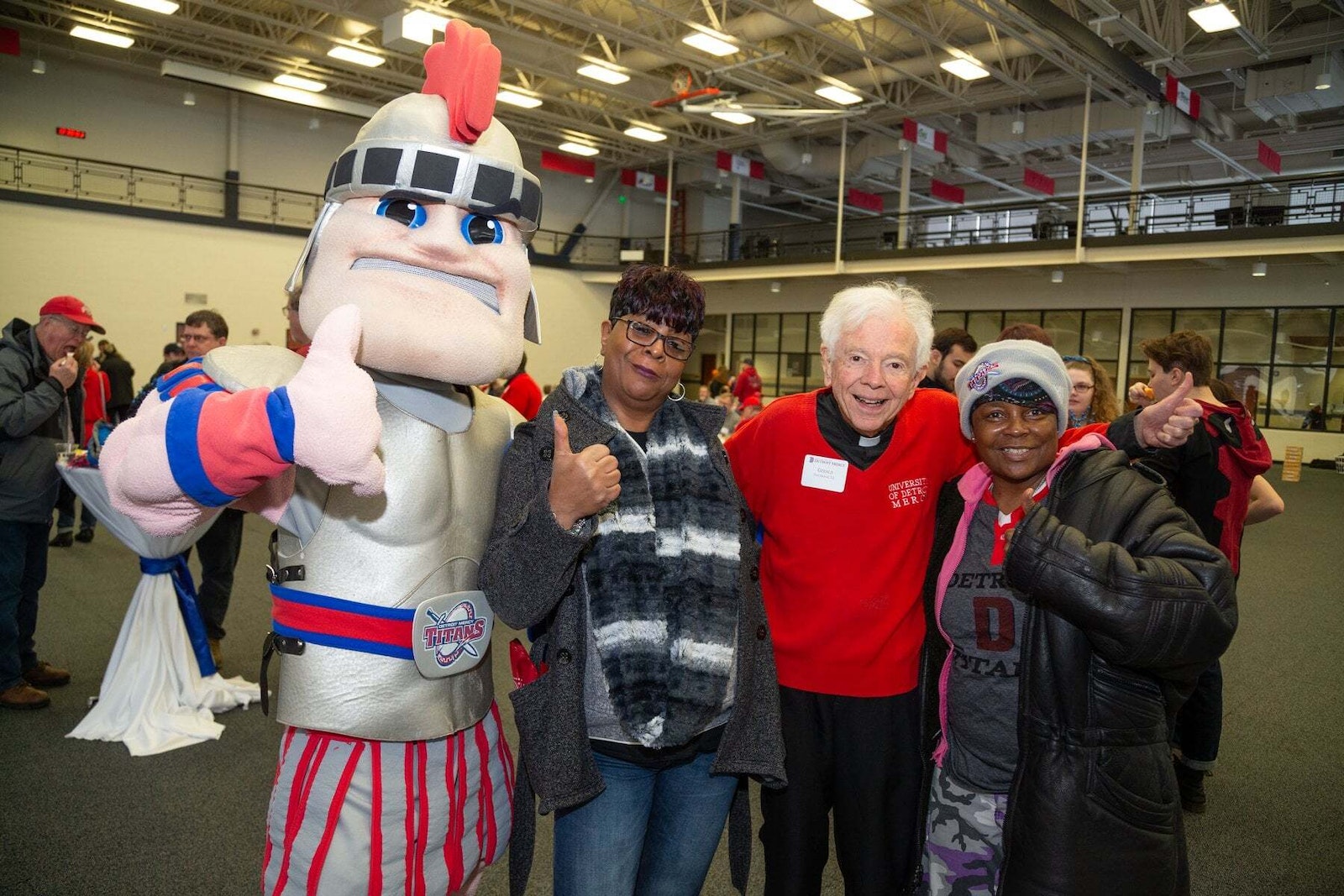 In addition to his rigorous academic pursuits, Fr. Cavanagh enjoys spending time with students, faculty and staff on campus. He is often found at Titans basketball games wearing his trademark red sweater. (Courtesy of the University of Detroit Mercy)

“But I was very fortunate, and the work was much to my liking,” he said. “Back in those days, people were saying that a firm’s purpose was creating value for shareholders. They weren’t talking about the workers or the community or the customers. In terms of the purpose of the firm, that has shifted in the last few years. They count me as one of the founders of business ethics. And it really was pioneering work. I was just glad I was able to do it.”

In addition to teaching and writing books and articles, Fr. Cavanagh has found time to deliver nearly 90 professional presentations around the world — in Australia, Canada, Germany, Indonesia, Mexico, Spain and the United States, including at Harvard and Stanford. He credits his Jesuit training for his success.

“The Jesuits taught a pragmatism that supported my engineering background — that ‘let’s get it done’ attitude. And how you do it is just as important,” Fr. Cavanagh said.

“There is so much about the Jesuit tradition: discernment and making decisions; where God is calling you; training yourself to be sensitive to people and yourself; God tapping you on the shoulder — those kind of things,” he continued. “And of course, the urging to do regular prayer, that’s helpful, too. Just to take time to back off and take time away on a daily basis.” 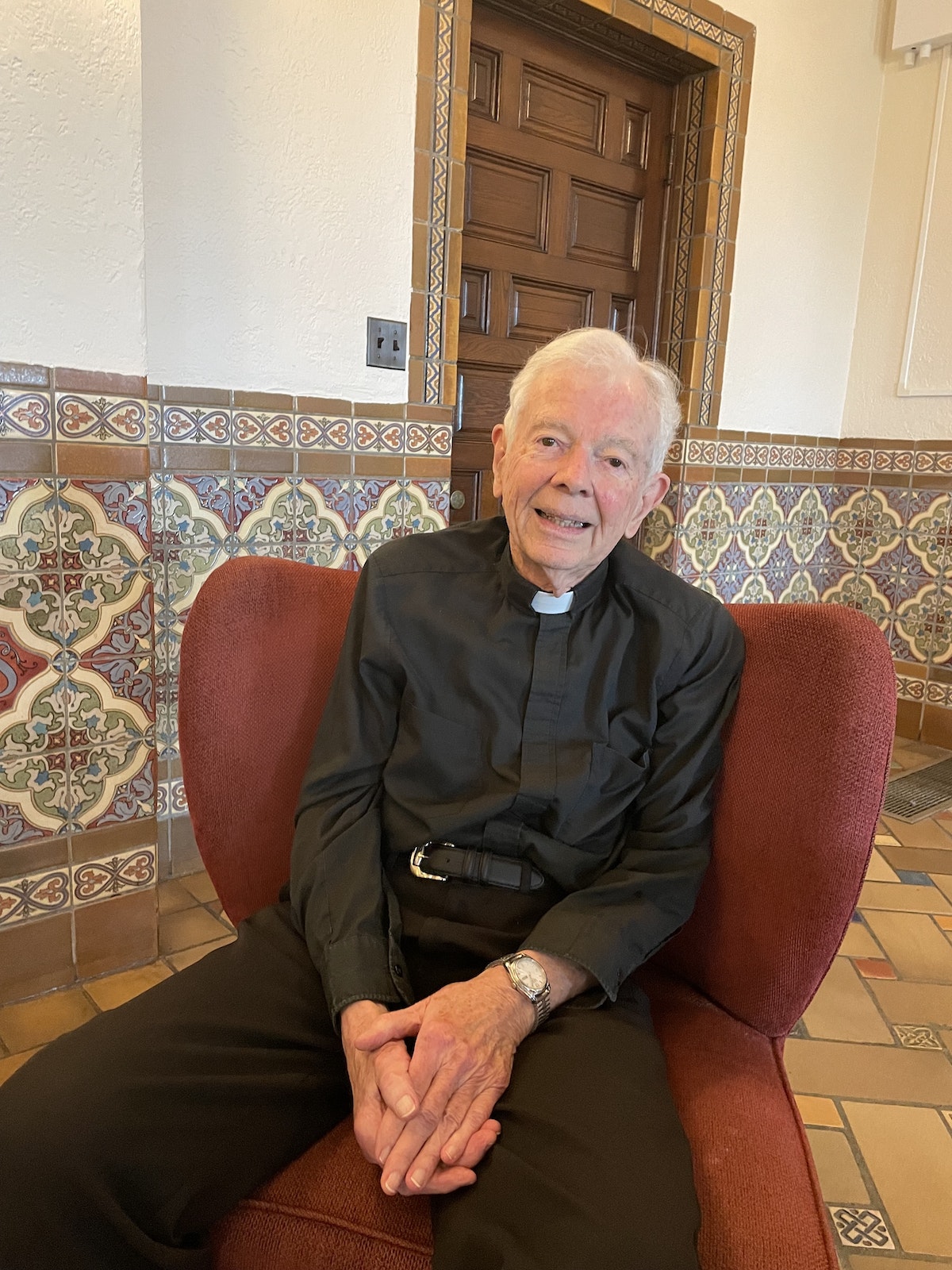 At age 90, Fr. Cavanagh plans to retire from teaching next year, but he hopes to stay involved in the university, he said. One of his greatest joys is hearing from former students and coworkers who have been able to apply his classroom principles in the real world, he said. (Jim Dudley | Special to Detroit Catholic)

“I have former students come back and say, ‘Boy, that class and what you taught really had an influence on me and made me think about the issues we’re facing in a totally different way.’ So that’s a big plus,” Fr. Cavanagh said. “I have very close friends who are executives in firms in the city who have said the same thing. That’s something I really thank the Lord for: to be able to have had a life where I was able to have an influence on both individuals in the classroom and, frankly, even more importantly, on their influence on the world we live in. To have an impact on the atmosphere in the business firms, that’s a real blessing.”

When asked how he had time to achieve so much, Fr. Cavanagh merely shrugged and smiled.

“I think it’s God’s grace and the gifts that God gave me,” he said. “I just tried to use them intelligently in a way that will most help the world we live in. That was a goal of mine right from the beginning. How can I be of most help to people?”

At 90, Fr. Cavanagh admits his energy isn’t what it used to be, but that hasn’t stopped him from finishing a recent article and spending nice days walking the track on the university’s campus.

Although Fr. Cavanagh plans to retire from teaching next year, he’ll still be involved on campus.

“The dean wants me to keep my office as we have a new guy coming in, who has a terrific background,” Fr. Cavanagh said. “He wants to work with me, so I’m really looking forward to that.”

Jeff Bartel is chairman and managing director of Hamptons Group, a private investment and strategic advisory firm headquartered in Miami.…

Business Ethics Considered As "good": The descriptive component of business ethics was developed by those trained in the social sciences…

Corporate Code of Ethics.A code of ethics begins by setting out the values that underpin the code and describes an…

Operating by an inventory of moral standards helps companies navigate challenges, present exceptional service and retain quality workers. In this…